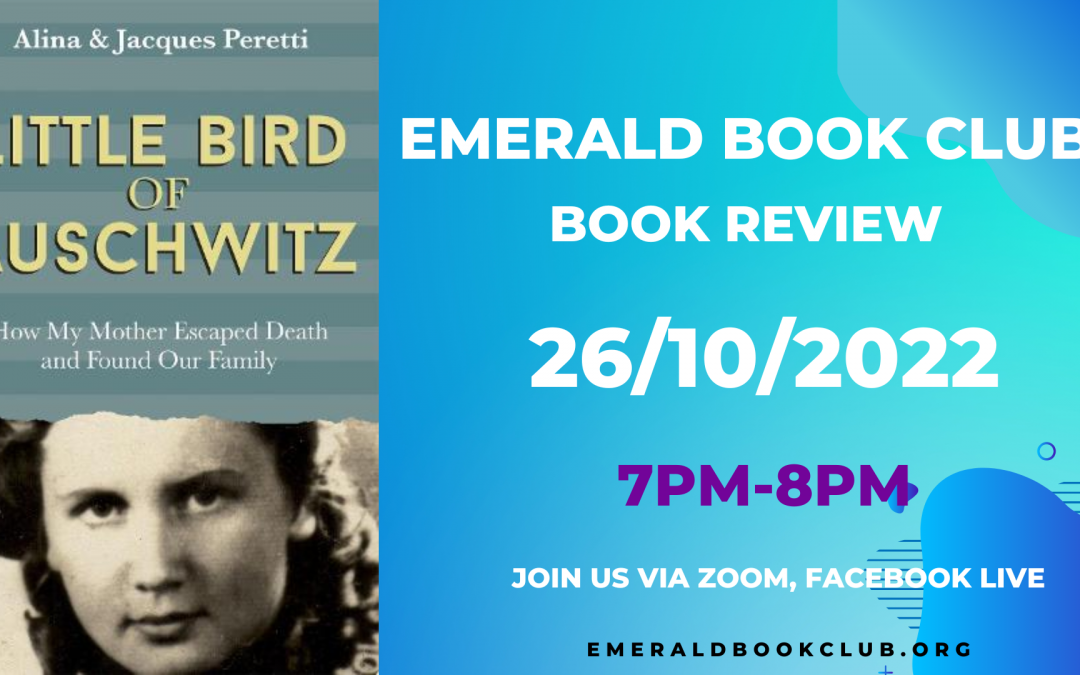 Little Bird of Auschwitz: How My Mother Escaped Death and Found Our Family By Jacques Peretti · 2022

At the heart of this story is a family who were strangers to one another.

‘That nickname . . .’
“Little bird.” It wasn’t mine. I found out later he gave it to every little girl that came in to be injected.
“Little Bird” didn’t mean anything. It was a trick. There were thousands of “little birds”, just like me, all thinking they were the only one.’

Now ninety, Alina has been diagnosed with dementia. Together, mother and son begin a race against time to record her memories and preserve her family’s story. Along the way, Jacques learns long-hidden secrets about his mother’s family. He gains an understanding of his mother through retracing her past, learning more about the woman who would never let him call her ‘Mum’.

About the Author of Little Bird of Auschwitz

Alina Peretti graduated from Wroclaw University in Poland and trained as an architect, working in Senegal, England, France and Switzerland. She later became a tour guide, taking visitors all over the world, including to Auschwitz, but never went through the gates herself. She now lives in London with her husband Peter.

After graduating from The London School of Economics, Jacques Peretti became an investigative journalist. His award winning television series include The Men Who Made Us Fat, The Super Rich and Us, and Trillion Pound Island. His first book The Deals That Made The World is now a paperback, and his podcast series Edge of Reality available as an audible original.

You have Successfully Subscribed!

We use cookies on our website to give you the most relevant experience by remembering your preferences and repeat visits. By clicking “Accept All”, you consent to the use of ALL the cookies. However, you may visit "Cookie Settings" to provide a controlled consent.
Cookie SettingsAccept All
Manage consent

This website uses cookies to improve your experience while you navigate through the website. Out of these, the cookies that are categorized as necessary are stored on your browser as they are essential for the working of basic functionalities of the website. We also use third-party cookies that help us analyze and understand how you use this website. These cookies will be stored in your browser only with your consent. You also have the option to opt-out of these cookies. But opting out of some of these cookies may affect your browsing experience.
Necessary Always Enabled
Necessary cookies are absolutely essential for the website to function properly. These cookies ensure basic functionalities and security features of the website, anonymously.
Functional
Functional cookies help to perform certain functionalities like sharing the content of the website on social media platforms, collect feedbacks, and other third-party features.
Performance
Performance cookies are used to understand and analyze the key performance indexes of the website which helps in delivering a better user experience for the visitors.
Analytics
Analytical cookies are used to understand how visitors interact with the website. These cookies help provide information on metrics the number of visitors, bounce rate, traffic source, etc.
Advertisement
Advertisement cookies are used to provide visitors with relevant ads and marketing campaigns. These cookies track visitors across websites and collect information to provide customized ads.
Others
Other uncategorized cookies are those that are being analyzed and have not been classified into a category as yet.
SAVE & ACCEPT